As the memorabilia industry continues to grow, demands need to be met. Framing sports jerseys seems like the go-to as far as sports collectibles goes. How far do these collectors really go? If some of these sports shadow boxes give you a clue, there’s really no defined limit.

It’s not difficult to think just a little bit outside (or inside) the box. Whatever a player or team has touched, especially if they’re well known, touches to gold. Hockey pucks, old leather football helmets, bats and cleats have become the norm. In this blog, I’m going to show you some of the more unique sports item’s we’ve framed. I will also highlight one very interesting “miss” in regard to framing sports memorabilia. They’re out there, trust me. 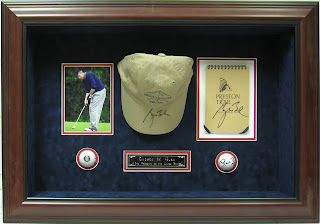 Here, we’ve got a George W. Bush Golf memorabilia shadow box. Obviously, golf balls are well-known to be sought after collectibles. So are the hats worn during tournaments. This piece become unique, however, when it incorporates a yardage tracker notebook. It is signed by the former president of the United States and Governor of Texas himself. 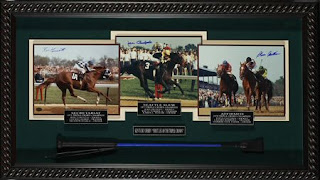 A lot of horse racing framed memorabilia comes with autographed photos of the jockeys and horses actively racing. Pates are good to help in the identification of the photos, but what is special here is the jockey whip at the bottom. It may be rarer to see these around.  It’s debatable in the racing world whether or not these whips are even necessary to use in the sport. 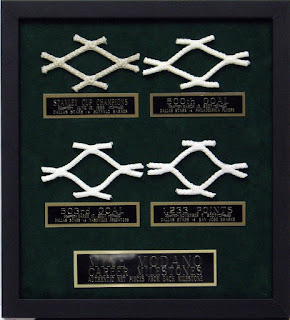 It’s widely been considered a trick of the trade to place used hockey goal netting into shadow boxes for a 3-d, at-the-game- feeling. This piece, however, is solely dedicated to the netting. Below, black aluminum plates identify the original of each scrap of netting in the games Mike Modano performed in. That forms the overall design aesthetic of the frame. 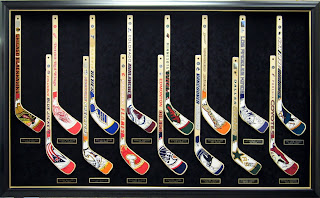 Keeping with the hockey theme for a bit, this shadow box is comprised completely of mini hockey sticks as opposed to one of two larger full-sized sticks. In addition, each stick is signed and below, a plate identifies the corresponding hockey player. 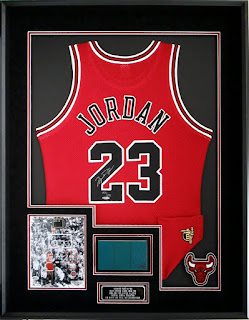 When you think of sports shadow boxes, you might not think of a jersey, but a framed jersey is technically a shadowbox. Finding any legitimate signed Michael Jordan items from his Chicago Bulls days is rare enough. Finding a signed jersey framed with a piece of the old court floor is another thing entirely. The contrasting turquoise color really makes the flooring stick out against the red jersey. 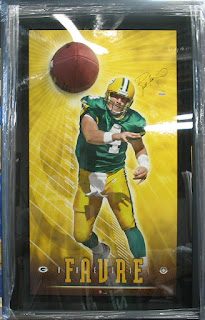 Already wrapped and ready to ship, CSD‘s creation includes a signed Brett Favre (Green Bay Packers) photograph poster with a full-sized football seemingly jumping through the frame. Typically, full-sized footballs stand alone when they are framed, are rarely do you see it using in such an active position.
Lastly, as for the miss in this post, I’d like to say that Fanatics generally is a very respectable, profitable company. With that said, I will not be buying a box of water any time soon. Yes, as a promotional item, fanatics scooped up the ice from an ice rink and put it in a frame. Fanatics, go sit in the corner for a timeout and think about what you’ve done.

After I saw that, I realized I had seen it all. Sports shadow boxes clearly know no bounds, and sometimes that’s not the best thing.