I’m a huge fan of Antiques Roadshow. The show really proves that the sports memorabilia industry began with the sports the items highlighted. In one AR video, we hear the appraiser talk about a collection of Boston Red Sox cards and letters.

According to the appraiser, the woman’s sports memorabilia collection was the best and most lucrative ever seen on the show. What made it so special? Hand-written letters to a woman who took care of the Red Sox along their journey, washing their laundry and cooking their meals.

The clip is fantastic and worth a watch from any memorabilia fan. It shows that custom framing value is priceless. Included in the collection is a card of Spalding, a name we’ve heard before.

With that said, the entire reason for writing this post is to, once again, highlight the importance of framing. At CSD, we use plexiglass to frame our pieces. Your initial thought may be, well, why not glass? There are very good reasons. First of all, glass tends to break. I know, I know, your world has been flipped on its head.

But in all sincerity, when glass breaks, it’s not a good thing in regard to your valuables. Whether you’re moving or your piece falls off the wall during a thunderstorm, one gash can cost you. Moreover, plexiglass keeps out ultraviolet light, allowing your antique shelter from the harsh sun, which will absolutely suck out the vibrancy of any color.

Since I’m on an Antiques Roadshow kick, I thought I would share with you all the transcript of a show featuring a painting called “The Answer.” 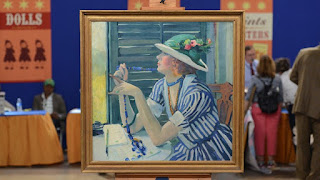 GUEST: In, golly, I guess it was 1963, I did my junior year in Madrid, Spain. And I lived right… close to the JoaquÌn Sorolla Museum in Madrid. Later, I moved to Cambridge with my first husband, who I met in Spain. It was about 1965, 1966. And we found some of Jane Peterson’s work. And he purchased several of the harbor scenes, and I just fell in love with this because it reminded me of JoaquÌn Sorolla.
APPRAISER: Oh, how wonderful.
GUEST: You know, the light and Spain, and so I just fell in love with her, and I’ve lived with her for, golly, almost 50 years!
APPRAISER: Oh my goodness. It’s fascinating that you talk about Sorolla because, actually, Peterson went to Spain and studied with Sorolla, and they became great friends. He also introduced her to Louis Comfort Tiffany, and she painted Tiffany’s gardens on Long Island, and she and Tiffany traveled around together.
So she was quite a colorful artist. She came from more modest beginnings and from Elgin, Illinois, and studied in New York, and then, of course, like most artists who wanted to advance or to study more, she would go abroad. So other than Spain, she’d have went to Paris. And she lived around the corner from Gertrude and Leo Stein.
GUEST: Oh, yeah.
APPRAISER: And they in turn introduced her to Picasso and CÈzanne and Matisse. She started out painting in more somber tones and more impressionistically, but once she got to know them, she became much bolder in color and was painting in a more Expressionist mode.
And she was quite, quite something. She was a single woman tromping through the Middle East and Italy and France and all over, so she was very much ahead of her time. There is a label that indicates that this was exhibited with the Allied Artists of America in New York, and the exhibition was held in 1929.
GUEST: Oh!
APPRAISER: So this obviously was painted…
GUEST: Before?
APPRAISER: Around that time or at least prior to. And, of course, the label on the back also tells us the title, and it’s called “The Answer.” And it’s very mysterious. I guess she’s perhaps writing an answer to someone. It almost looks like her beads have broken.
GUEST: They do, it looks like the chain is broken. I was wondering if she was so pensive, maybe she was writing a “Dear John” letter or maybe she had received a “Dear…” whoever her name is.
APPRAISER: Exactly, exactly, I know. I love the title and it’s very mysterious. It’s really in very nice condition, it’s oil on canvas, and it’s not lined, which we like to see. You said you purchased it unframed, did you not?
GUEST: Yes. And I had it framed shortly thereafter in Boston, but as I recall, I paid $150 for it.
APPRAISER: $150. Her work is very popular. It’s also a very period piece, and it’s very colorful and brilliant, and so for all those reasons, I think it’s very desirable in the marketplace. And I think that a gallery in New York would be asking $300,000.
GUEST: Where’s a chair? (both laughing) Now I need that chair! Oh, I’m so excited! Well, I just have always loved it. I mean, it really spoke to me.

There’s a reason why the appraiser asks the woman about the framing process. As the guest points out, she had the painting framed shortly after, preserving it against damage. Smart woman. Can you imagine how the value could have changed if she decided against a professional framing?

I actually watched an episode of Antiques this past Monday, and luckily, one woman put a painting in her closet, not to preserve the piece, but because she thought it was ugly!

Well, that ugly piece ended up being worth thousands upon thousands of dollars, and she’s lucky she was able to keep in unframed and intact, given all of the forces of nature.

So, long story short, if you think you have a valuable piece, go get it framed. I don’t want to have to say I told you so. There are just way too many things that can go wrong. Therefore, if you’re wondering about custom framing value, don’t wonder. Just get it done before you spill cereal milk all over your Babe Ruth photo.