Part of our business model involves a program dubbed “Home Game Auctions.” Our teams are many: We have auctions at stadiums with NFL, NHL, MLB and MLS teams. These are big-name sports leagues with teams who want to win and with names they want to protect. 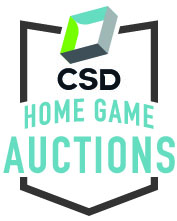 When I think about how CSD Sports has evolved, I think about how charity. Our company took a charitable act and turned it into an entire business  It started with “Cowboybilia.” What was it? It was a program where CSD’s employee(s) at the time got Dallas Cowboys players to sign cards for a good cause.

Now, our Home Game Auctions program have turned into a monster in its own regard. We are the king of live auctions.

I know a lot of businesses, especially sports memorabilia businesses, rely on auctions online. However, there are huge differences between holding auctions just meters from a field and at the comfort of your home.

I have been to these said Home Game Auction events. It can get pretty crazy. Fans from all around the country position themselves at our tables and point and smile at the framed memorabilia we have hanging above. The structure of the silent auction is pretty simple. At football games, for instance, a bidder can write down his bid up until the third period. Afterwards,  winners are called, emailed, or check up every couple of minutes to make sure they haven’t been outbid.

One venue I visited for Home Game Auctions was at AT&T stadium with the Dallas Cowboys. I had never been to a Cowboys game before, and let me tell you, it was a culture shock.

And that’s a lot coming from me, seeing as how I went to Texas Tech as an undergraduate. West Texas is another world, and that’s all I have to say about that. What was interesting to me was the energy in the air.

Sorry, I’m back to the Cowboys now. There’s a feeling of excitement and anticipation when you are housed in a building with seats for 80,000 people. In those instances, one cry from fans during a bad call turns into a wave of sound heard from blocks over. It reminded me what I think it would feel like to be a Roman watching a lion fight at the Coliseum. In that moment, it clicked for me why huge sports events are so successful. If you put a massive group of people into a room who all love (or hate) the same thing, everything turns into an amplification.

So, although our office is in Carrollton, we are everywhere: Washington, Ohio, Baltimore… and, yeah, Texas. Get er done. Or don’t, it’s Friday. Just go home and take a nap.